The Franciscan Sisters of Mary are grateful for the Environmental Protection Agency’s decision to move forward on their latest proposal to clean up the radioactive waste at West Lake Landfill. The proposed schedule of four and a half years provides a light at the end of a tunnel that has stretched on for decades. It is time.

As women religious devoted to compassionate care of creation, we have collaborated closely and intensely with the Missouri Coalition for the Environment and JustMoms and other groups advocating for total cleanup of the landfill. While the current proposal falls short of complete excavation of the nuclear waste, we do feel it presents a viable option and encourage the EPA to move forward with it. The action will make a great difference in the environment here in Bridgeton and the St. Louis area.

We applaud all those who have taken seriously the frightening consequences of simply leaving the radioactive waste in place, certainly our collaborators but also those at the EPA who have acted on these concerns. 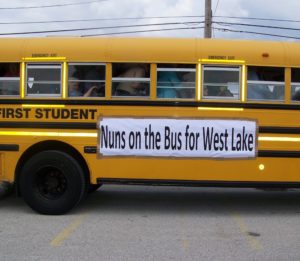 Our sisters will continue to hold the twice-monthly prayer vigils in the Marian Chapel of The Sarah Community and on St. Charles Rock Road near the Bridgeton Landfill as a reminder of the dangers the landfills present to those who live nearby and to the region as a whole. We trust that the EPA will move forward swiftly to create a plan and then excavate what waste they can—and will follow through on their intent to monitor groundwater and other indication of problems.

Our sisters moved to Bridgeton in 2010 just as the issues with West Lake were escalating because of the underground fire in the Bridgeton Landfill and its movement toward the radioactive wastes in the West Lake Landfill. The landfill issues are a problem that Bridgeton residents had no part in creating. Like our neighbors, we know that there is little time to spare, and we thank all those who have given us hope for a fair and decent resolution of the issues at West Lake.