Apprentices and their families gathered at EarthDance Organic Farm School Thursday, October 11, for a potluck dinner and bonfire in honor of the 2018 Farm and Garden Apprentice Graduation.

Marge O’Gorman, FSM, represented the sisters at the graduation. EarthDance Farm is a collaborator with the Franciscan Sisters of Mary, supported by an FSM philanthropic grant and the efforts of the FSM Focus Implementation Group, which actively promotes sustainable farming and accessible food in the St. Louis area.

Before the apprentices received their certificates, EarthDance staff members shared some thoughts. Kaitie Adams asked them whether they had experienced their “lifetime best-tasting vegetables” at the farm. She explained that the produce grown at EarthDance has what the French call “the taste of the place”—a distinctive ingredient in the soil that enhances the flavor of what is grown there. She said she will remember this taste for the rest of her life.

Eric Stevens spoke about the seeds they planted and the seeds that grew within them. He encouraged them to continue to nurture the seeds within.

Other staff members spoke about the relationships they developed as apprentices, and how important those relationships were to their time at EarthDance. 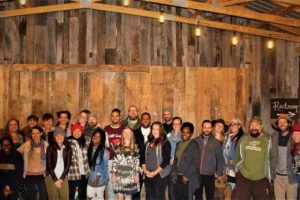 The apprentices also spoke. Several said that they valued the skills they had learned but that they treasured most the relationships that grew among them. They offered to continue to help and support one another in the future, which for some means beginning their own farms. They spoke of being family together, and expressed their gratitude for the staff and the great role models they had provided.

The apprentices reminisced about the rituals in which they engaged—especially ending each day with a “give me ten” hand smack. They remembered fondly the abundant hugs that helped them through the heat and hard work of producing vegetables, herbs, flowers, and fruit on the farm. They shared the hopes that had brought them to the farm, the surprises they discovered, the skills they developed, and the bonds they formed. 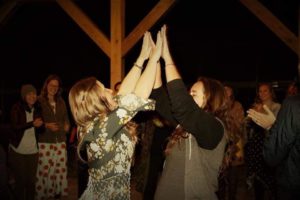 Molly Rockamann, founding director of EarthDance, asked Sr. Marge to share a few words. Sr. Marge congratulated the apprentices, assured them of the sisters’ support, and commended them for their hard work and community spirit. She affirmed the apprentices’ praise for the staff, pointing out her own awareness of them as mentors and role models in gardening and farming, and in life and social skills as well.

After the ceremony, the apprentices, staff, families, and friends shared the potluck dishes they brought for the celebration.