On Friday, March 15, 2019, St. Louisans joined people in more than a hundred countries in the Youth Climate Strike.

Ryan Strode, FSM Program Director, and his family, and Katie Balfany, FSM Program Associate, and her father headed to downtown St. Louis to show FSM’s support for climate justice, uniting their voices and actions with those of young people worldwide who are demanding that climate change be taken seriously and that measures be taken immediately to save the planet from devastation. 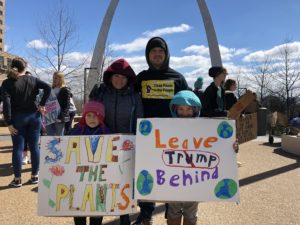 The movement began with 16-year-old Greta Thunberg from Sweden, who, dismayed by the total lack of progress on greenhouse gas emissions despite the pledges made at the climate talks in Paris in December 2015, began last August staging sit-ins on Fridays before the Swedish Parliament in Stockholm to demand substantive progress on climate change.

At age 15, Greta Thunberg addressed the delegates at the climate talks in Katowice, Poland, in December 2018, rebuking them for failing to commit to real change and allowing climate justice to take a back seat to the richest few who benefit from the burning of fossil fuels and production of luxuries that threaten the planet.

Protesters took to the streets Friday. According to climate scientists, Earth’s inhabitants have just 12 years to make progress to keep the planet from irreparable and devastating climate change. 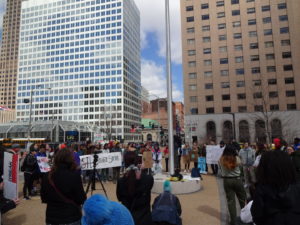